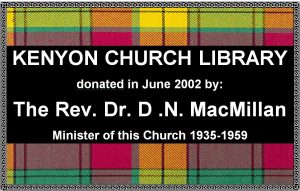 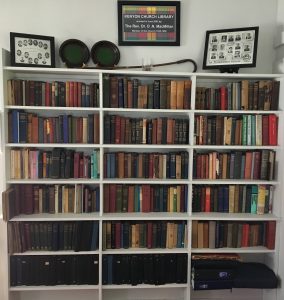 On Sunday, October 27, Reverend Jim Ferrier presided over the dedication of the library on the 2nd floor of the Church sanctuary to the Dr. D.N. MacMillan Memorial Library.

Rev. Dr. Donald Neil MacMillan was a native of this area having received his schooling
in Finch Public School and Avonmore High School before going on to study at McGill
University and Presbyterian College. He graduated from the University of Edinburgh,
with a PhD in Theology in 1935 and was Ordained and Inducted to Kenyon Church on
July 4, 1935. He ministered here until 1959. During the years of the Second World
War, he served as Chaplain with the Royal Canadian Air Force from January 1941 to
September 1945. Dr. MacMillan was appointed to the Chair of Systematic Theology in
the Presbyterian College, Montreal in June of 1959. In 1973, after a sabbatical year
spent studying in Geneva, Switzerland, he returned to the College in the capacity of
Acting Principal from 1973 until his retirement in August of 1978. He continued his
research work in these years and in 1984, Dr. MacMillan published a book entitled “The
Kirk in Glengarry”.
Dr. MacMillan was the husband of the late Jean MacLean. He was predeceased by his
infant daughter Flora and two sons, Robert and Donald. He is survived by his
grandchildren Sebastien and Sarah.
Prior to his death, Dr. MacMillan donated his books and papers to Kenyon Manse
Library in June 2002. It was catalogued and stamped by then Student Minister, Ms.
Brynn Carson as well as Elders Catherine Anne Gauthier and Evelyn MacQueen led by
Annabelle Hartrick, Clerk of Session, on June 19, 2003. The contents were moved to
the Church in 2010 due to the sale of the Manse. This library is now located upstairs in
our Church. We are honoured and blessed that Dr. MacMillan chose Kenyon Church to
be the steward of his life’s work.

There are no upcoming events.